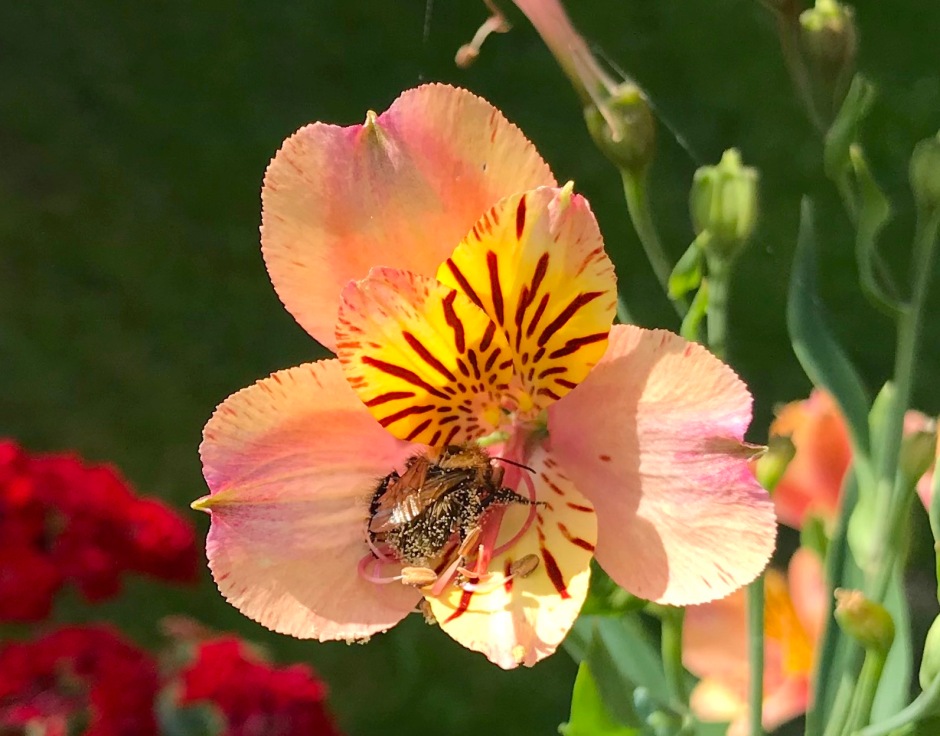 This little bee spent several minutes deep inside this alstroemeria flower, and in the process getting an all-over pollen decoration. It stayed for so long that I decided to investigate. I didn’t have a camera handy, just my phone. In good light, results can be quite satisfactory (in low light or on so-called “zoom”, it’s terrible).

If anyone can ID this bee, please leave a comment. 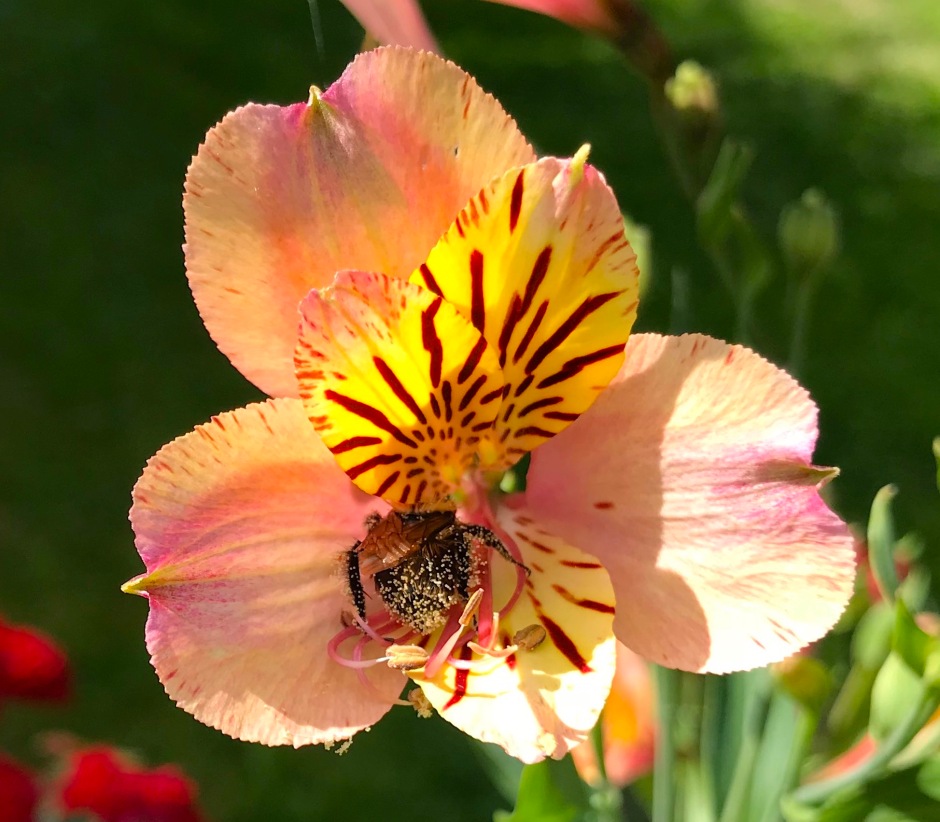 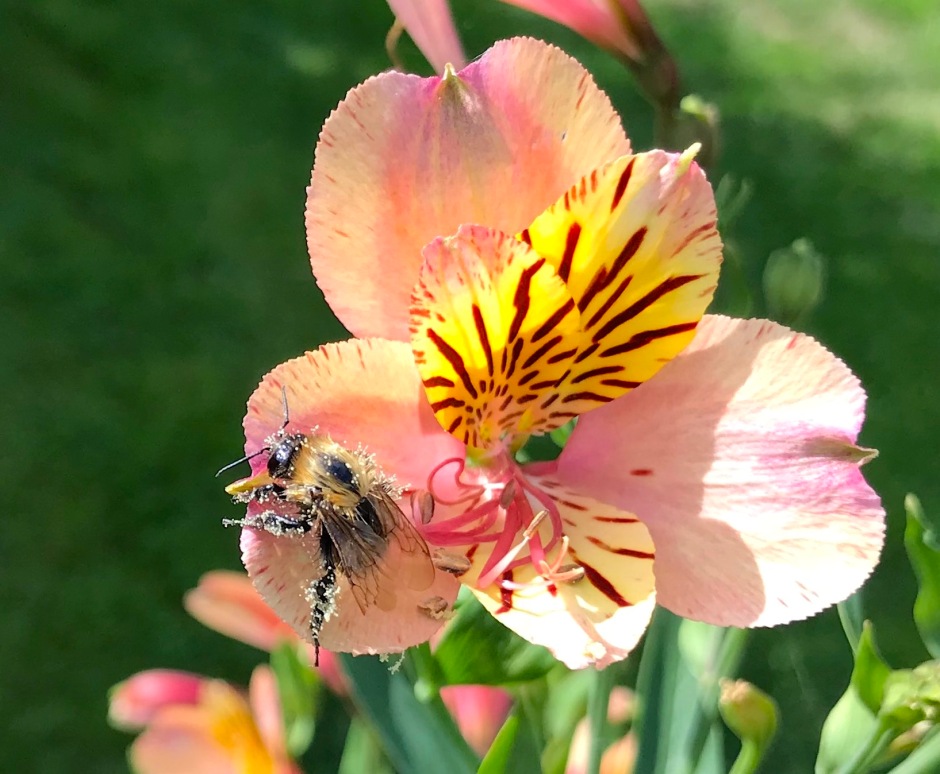 I watched this small bee as it circled round the flower, busily filling its already bulging bright yellow saddlebags. We are fond of these little bees, which were introduced to the UK (or perhaps simply spread here) quite recently and have made themselves at home. They are one of two bee species that have chosen to live inside our house.

The location varies from year to year, but for about 3 months a year over the last few years there has been gentle bee-chatter going on in the roof-space above our bedroom, or in an old wall cavity between 2 rooms.

This year the tree bees decamped to the roof-space above the kitchen; and a splinter colony has recently set up a buzzing plant-produce stall in a cavity above the front porch, no doubt to the surprise of the bats that hang out there.

You may have noticed that the bee featured here is carrying a tiny passenger, a mite, that you can see in some of the images (eg the header image). There’s a small story about these photos. I own ‘beloved camera’, ‘unreliable camera’, ‘snappy camera’ and an iPhone. ** 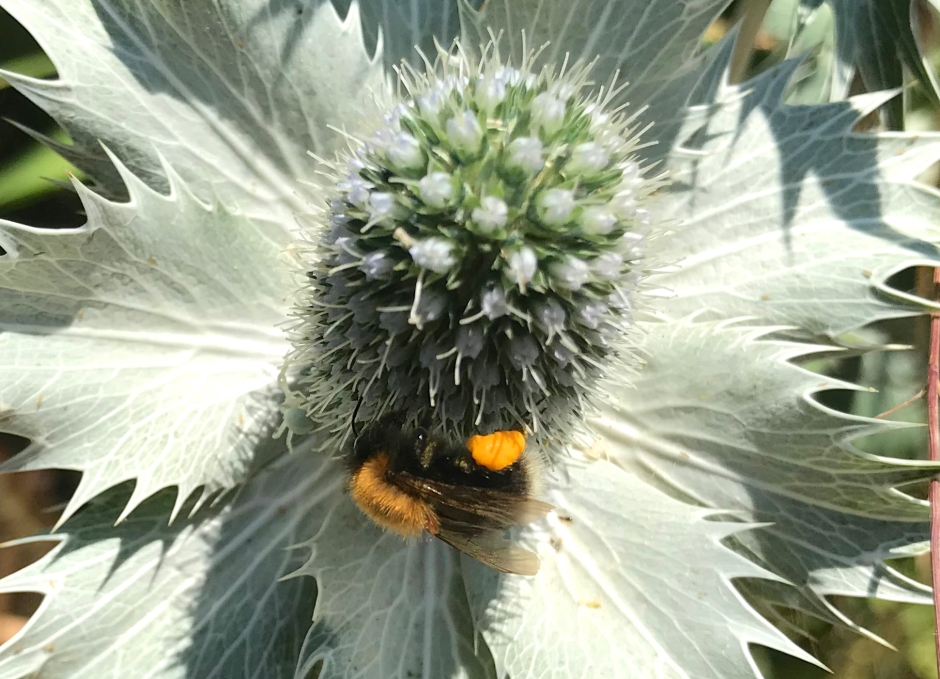 When I first saw this little bee, I had ‘unreliable’ with me (‘beloved’ being 125 miles away). It is a martyr to light sensitivity, with an annoying ‘satirical’ take on focus. Reader, I rattled off 20 shots. Then I deleted every one of them. Quickly throwing the camera behind a wall in disgrace, I reached for my phone in desperation to catch the bee at work in the sunshine. Here are the results, with a level of clarity that only ‘beloved camera’ could have matched.

** There was ‘hated camera’ too, a DSLR that I never mastered and eventually sold back to the place I bought it for a fraction of the original cost. They saw me coming… 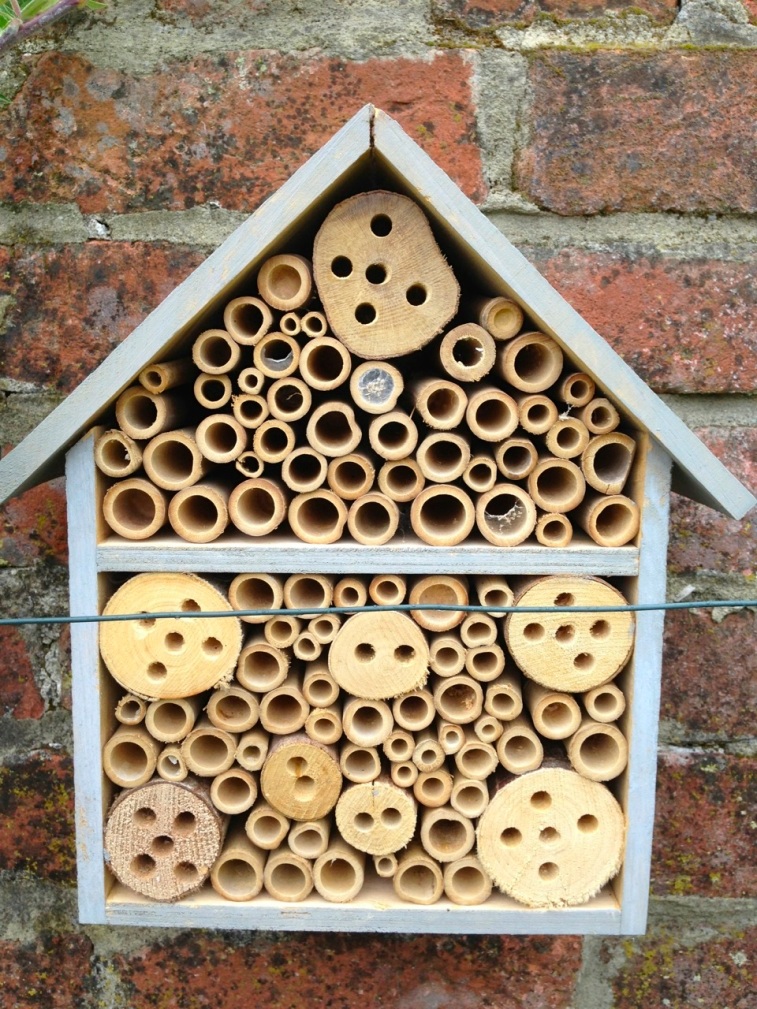 It took a year before there were many settlers in the new bee house. To begin with, there were just some transients; tiny bees that stationed themselves at the mouth of a hole, retreating from time to time to the depths. I’ve no idea what type of bee they were, but they didn’t leave any building works. And then there were a few wax caps to wonder about.

The first resident occupied the penthouse.

The box began to weather a bit during that first winter, and to fall apart slightly. That summer, we had mason bees in many of the holes, with around 60% occupancy – plus some waxed caps. The timber homes were clearly preferred to the bamboo sticks, and the first to fill up. Later, we noticed the first leaf cutters moving in, their green plugs slowly turning brown as the leaves withered.

This year, by the end of May, business was thriving. The house was weathered and had no doubt completely lost the heady scent of Garden Centre. The upper storey was more popular than the lower; maybe the horizontal stem of a cox apple tree growing against the old wall was a disincentive for potential downstairs dwellers. 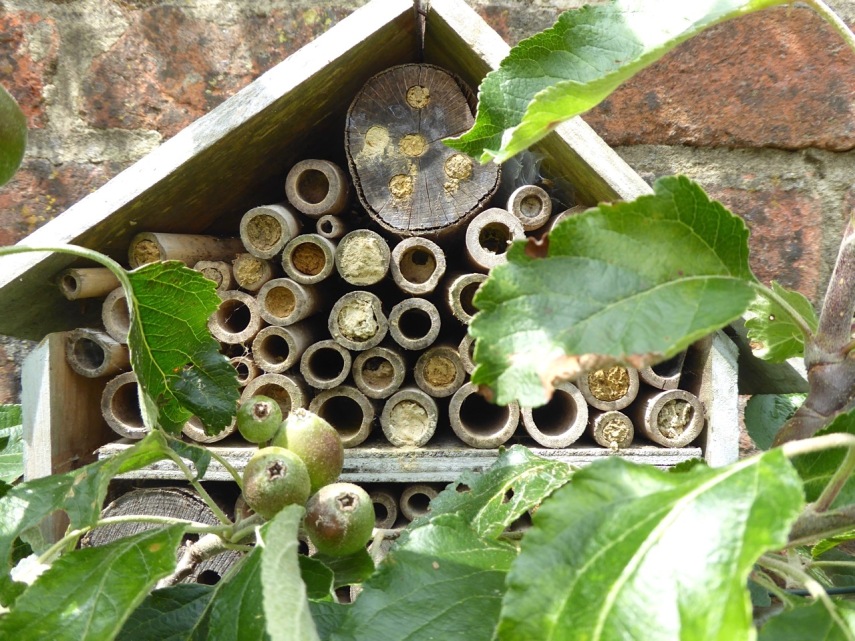 Two months later, as July fades into August, there are a few changes, but overall the house is much the same. So far, there have been no leaf cutters. And no little ‘peeping’ bees either. I’m disgracefully uninformed about the types of bee to which we offer a home. We’ve replanted much of the garden to benefit honeys and bumbles – with a consequent increase in butterflies and hitherto unknown types of moth. The solitaries are still a bit of a mystery. Time I got a grip, I think. Still, the apples are looking very promising… 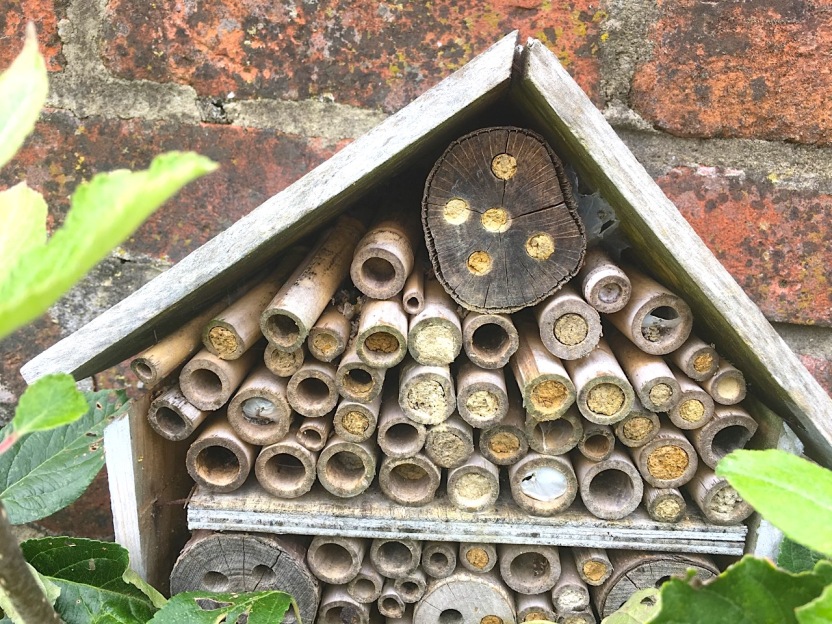 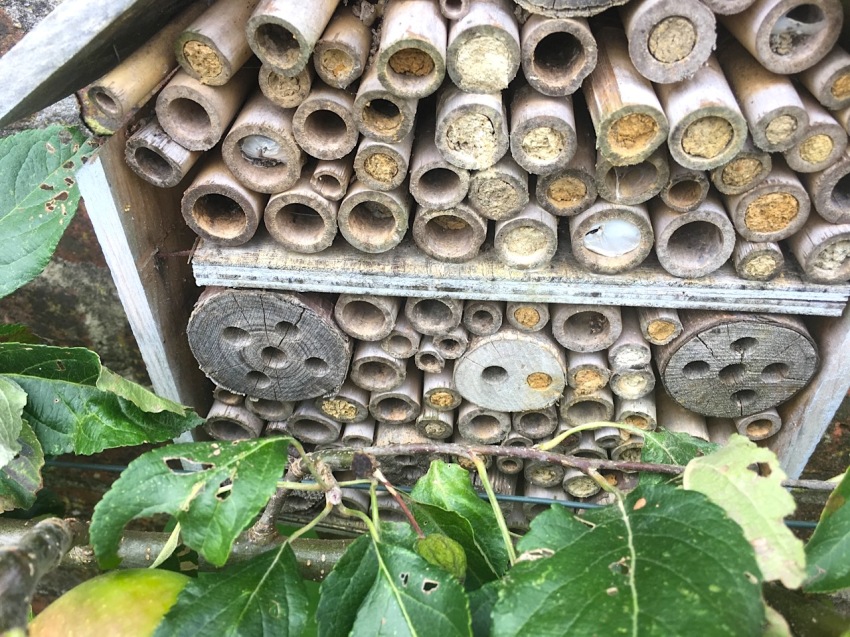 St Martin de Boscherville is a small town – more of a large village – quite near Rouen, but a world away from the bustle of the city. In many ways, it is much the same as any similar French rural community 30 or more years ago. Set in an agricultural landscape in a loop in the Seine, it has the familiar small shops for provisions, the cafe / bar, some old houses and barns, some neat modern houses and… a magnificent early Norman abbey, St Georges. It was largely spared from revolutionary destruction by being designated the parish church, as it remains today. There’s more to be written about the abbey, a favourite of artist John Sell Cotman during his Normandy tours.

The gardens are being – have been – restored, if not to their former glory at least to an impressive standard, with well-ordered flower beds, vines, herbs and fruit trees – staples of the medieval way of monastic life. And a hive. A truly splendid ‘Bee Pass’ chimney hive that stands impressively tall. Each facet has one or more doors for access to the innards. I have posted videos below that show the workings of this unusual hive rather better than I can describe them. These hives have been installed in a number of locations in France – not least the Chateau de Chenonceau – and Germany. I’ve no idea if there are any in the UK yet, but if not, there ought to be… 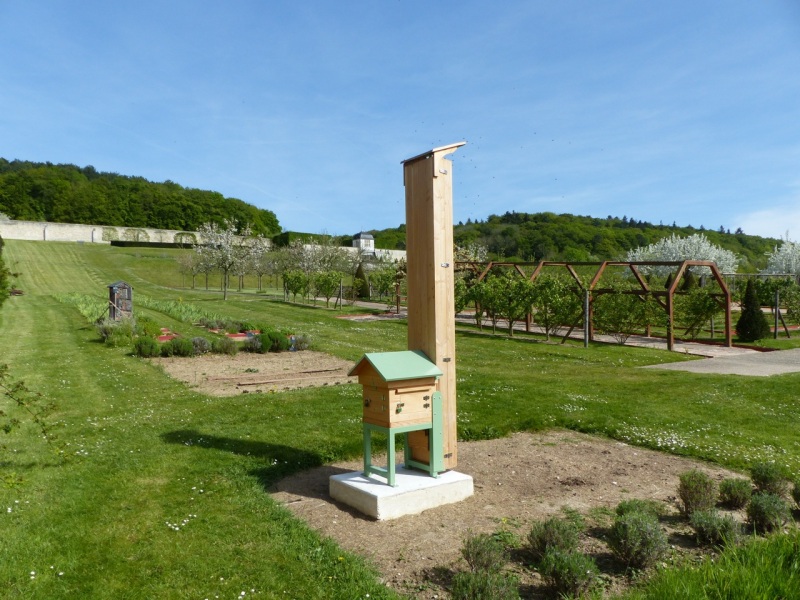 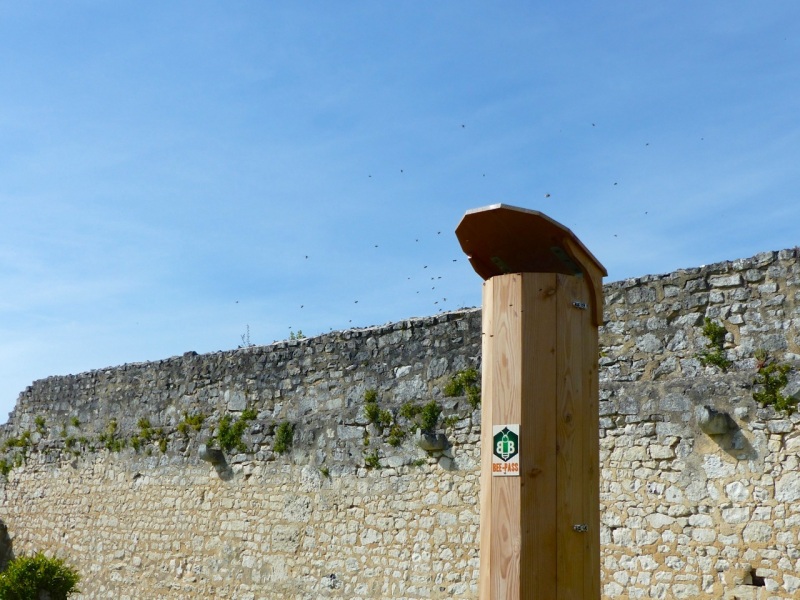 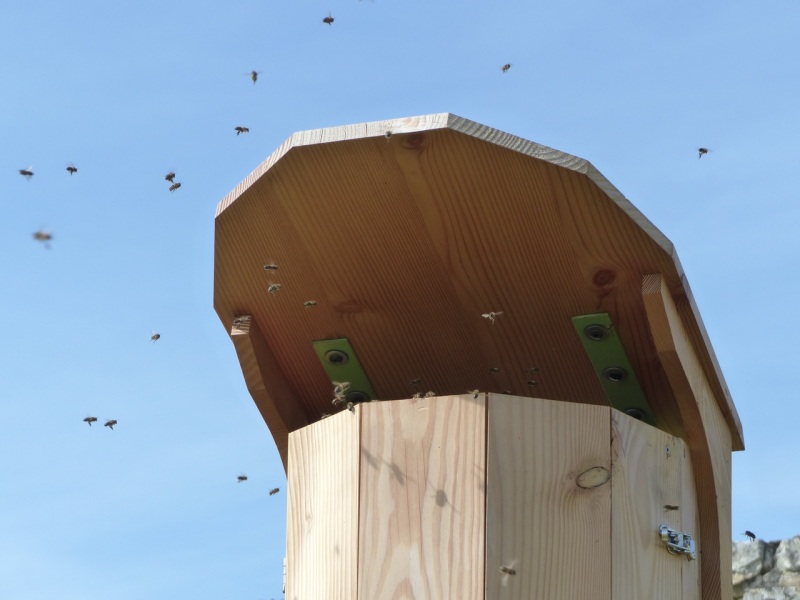 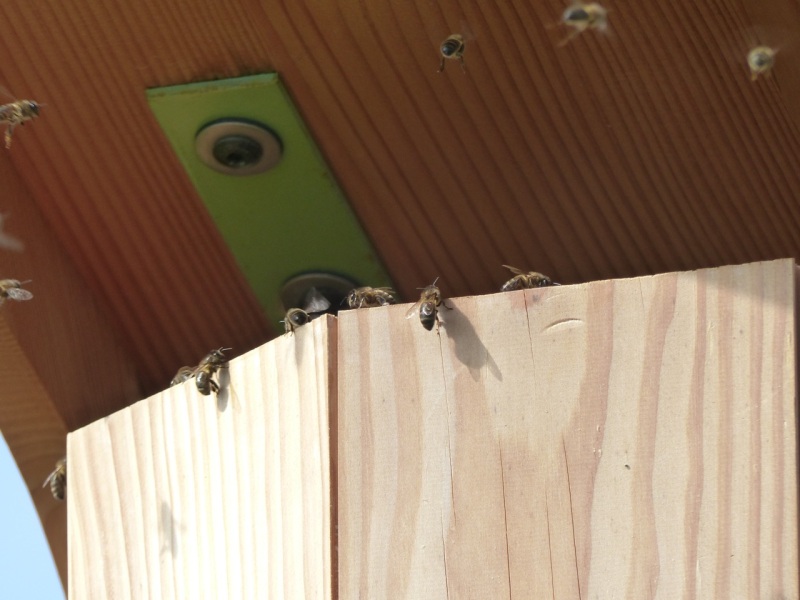 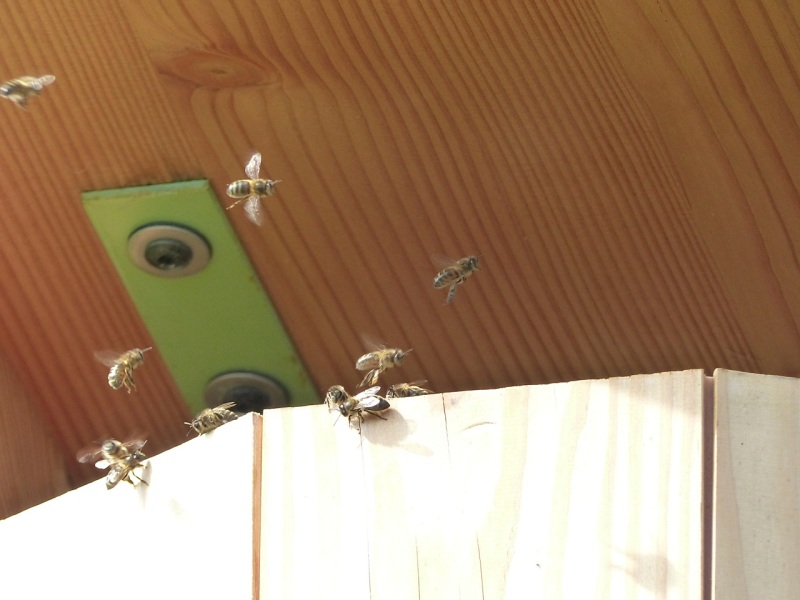 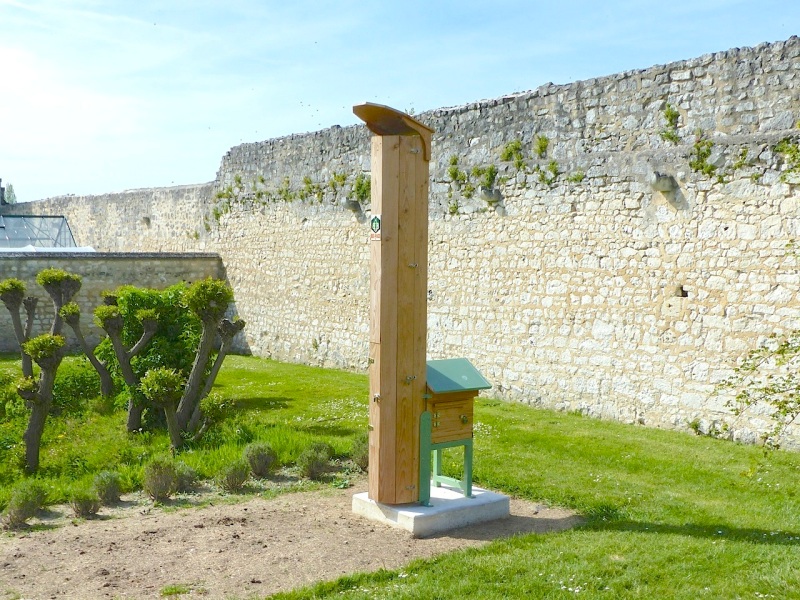 This honey bee was making the most of the late September sunshine. The colour of its pollen load suggests it had decided to target the dahlias. It managed to get a good all-over dusting too. 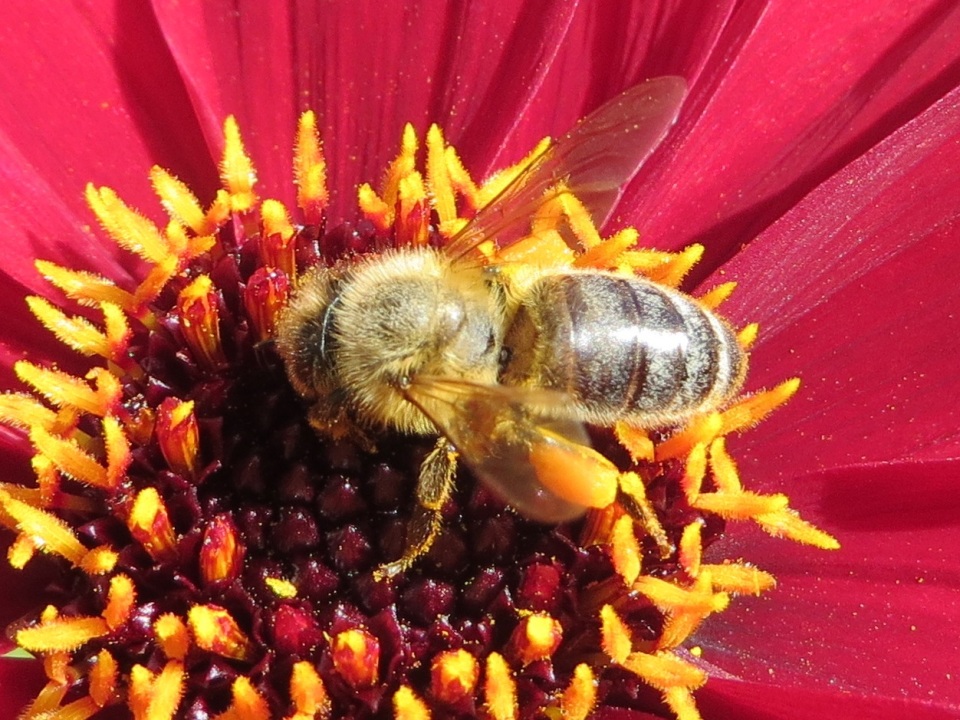 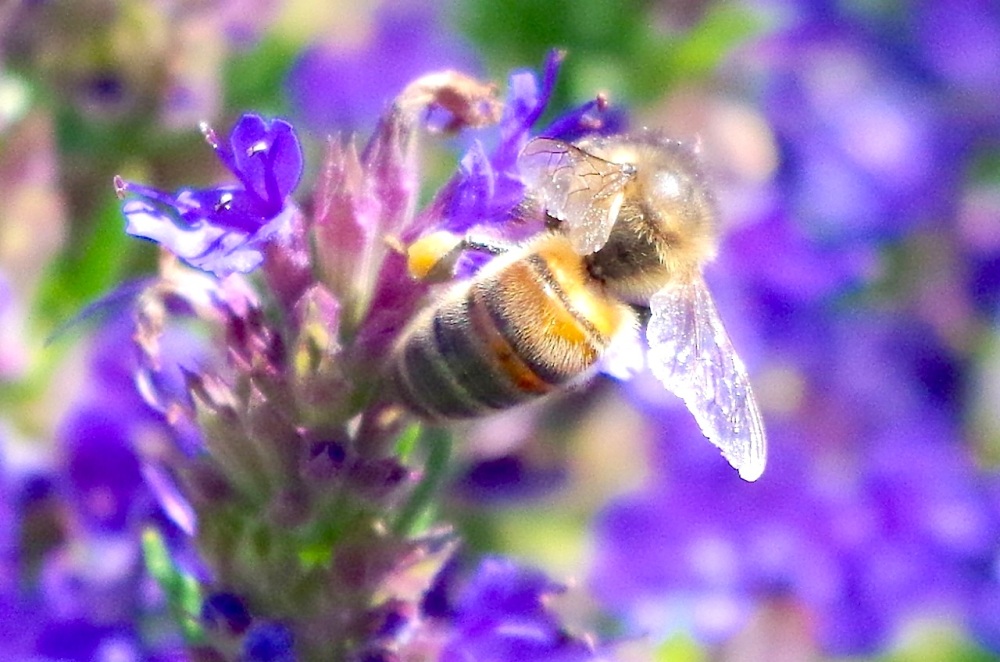 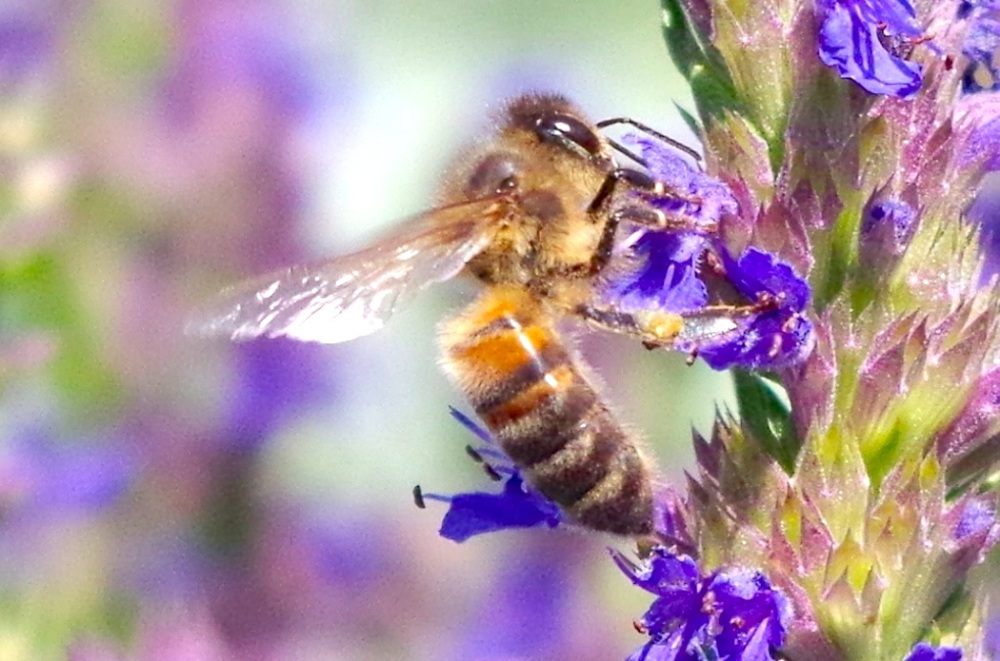 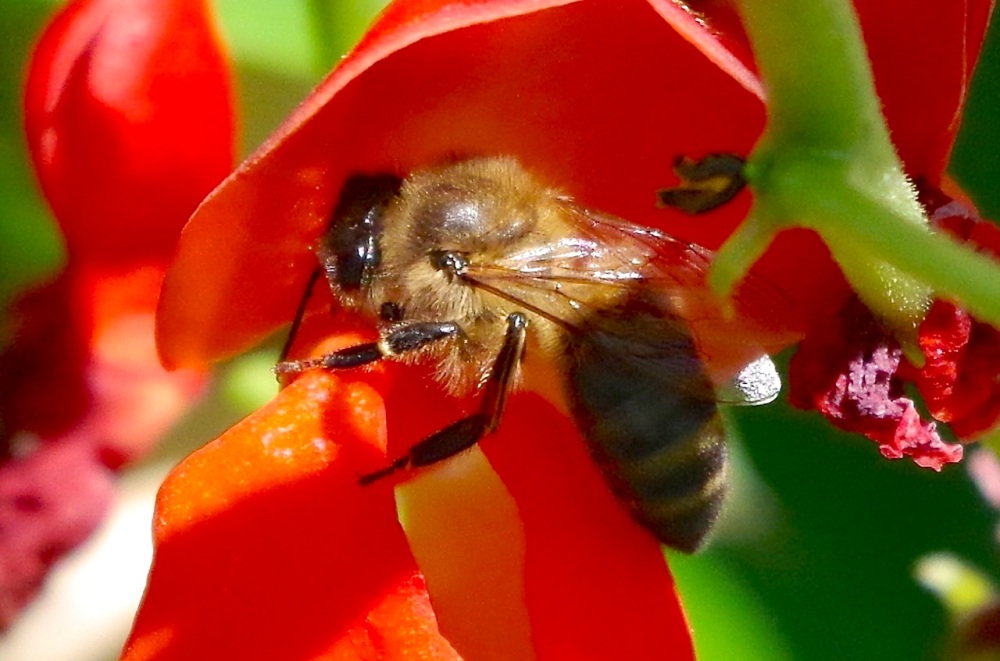 Whitchurch Canonicorum, Blandford Forum, Toller Porcorum and Bombus Lucorum – all very Dorset names.  Except the last of course. Here are a few of them, feasting on hyssop. The first one is launching himself on his way to the next stem. 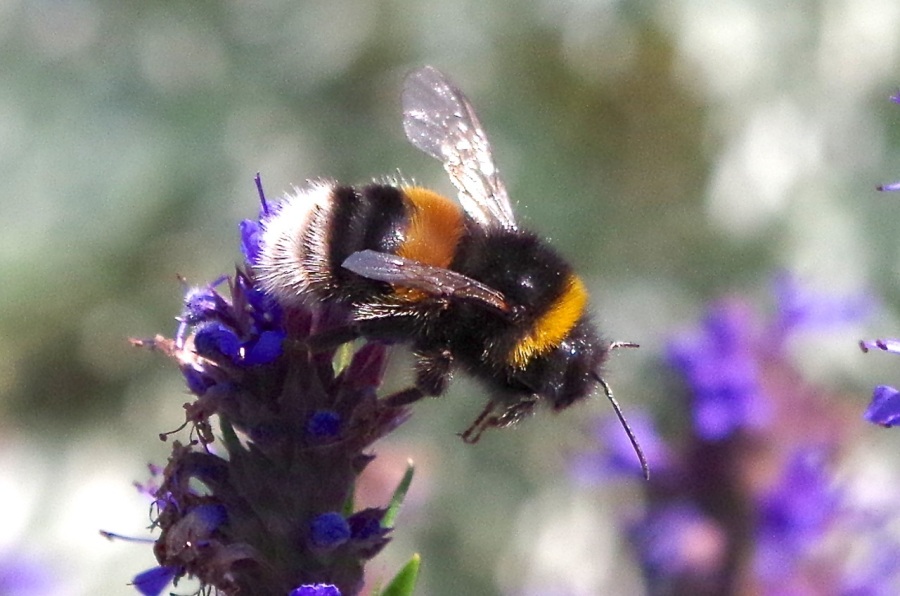 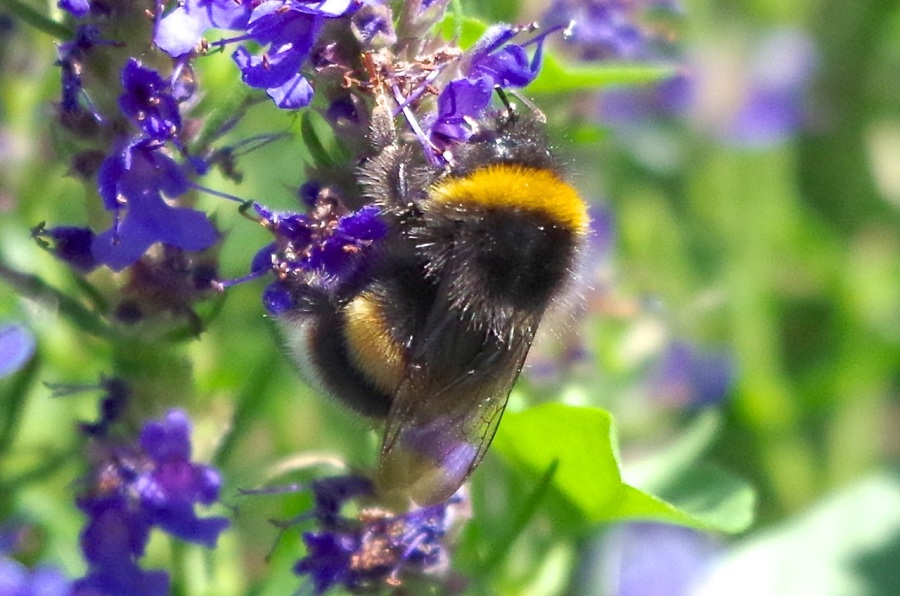 This bee has a fair-sized mite on its back 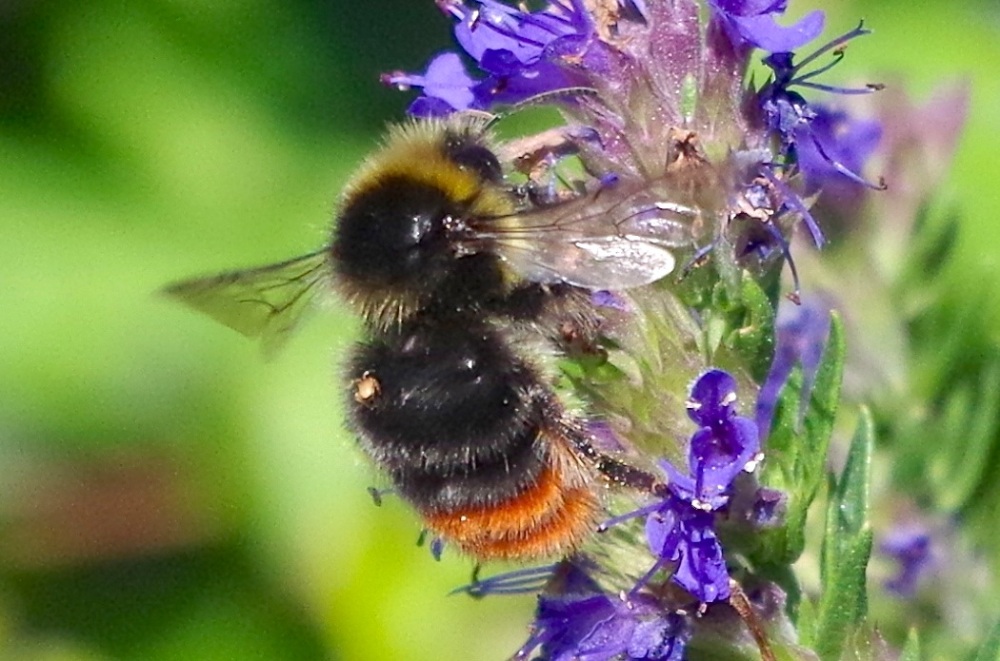 The sun was out, the bees were out and I was out trying camera settings having failed spectacularly to come to terms with a new(ish) SLR. The problem remains me, not it, but I sense that the hatred is mutual. Anyway, a few bee shots worked well enough to use… This is my favourite bee, tiny and pale, far smaller than the sturdy yellow and black bumbles jostling for the space on the hyssop and lavender. I like the way their packed saddlebags matched their  colouring. There are probably two or even three different species of bee here for all I know, but it’s hot and I can’t be bumbled to look it up…

This is the first year I have taken on board the number of mites the bees carry. #1 has a fine one under the wing; and I saw one bumble with a smart necklace of mites. I realise they are mostly non-parasitic (apparently), and maybe it is even a sign of good bee health… 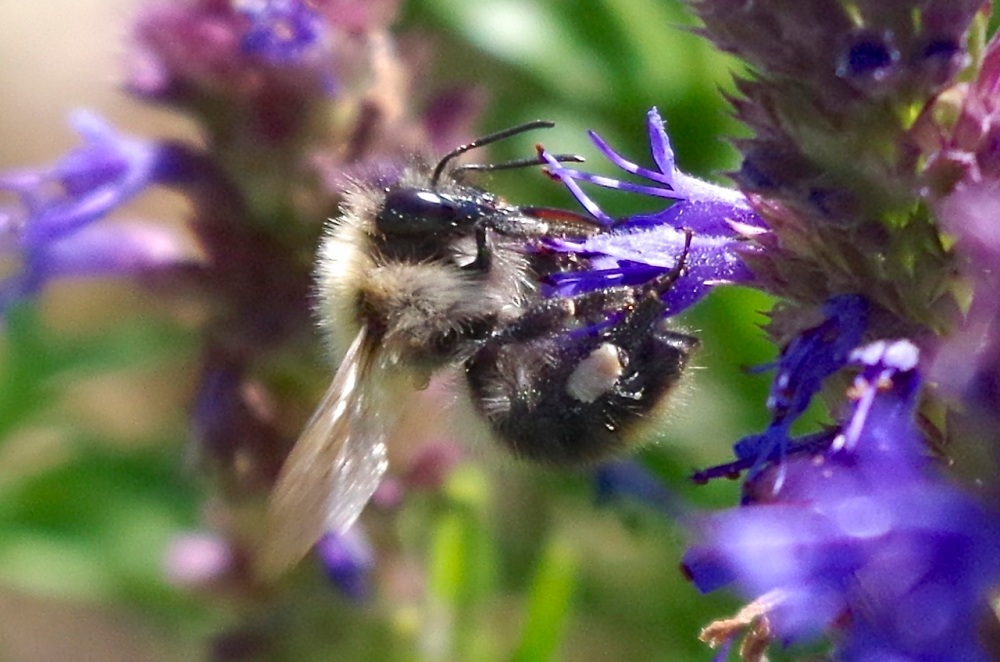 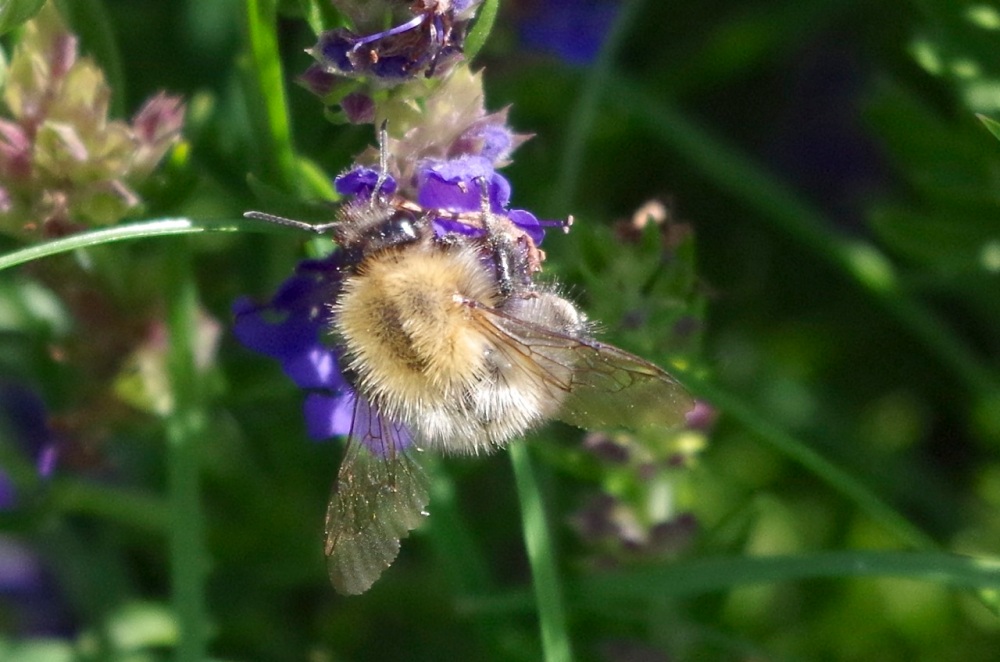 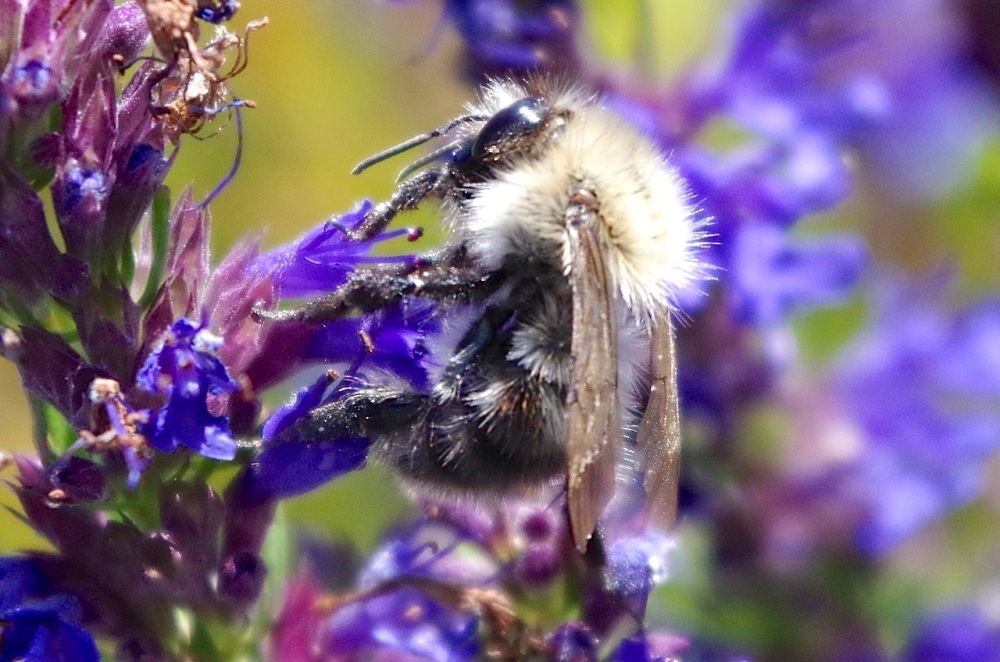 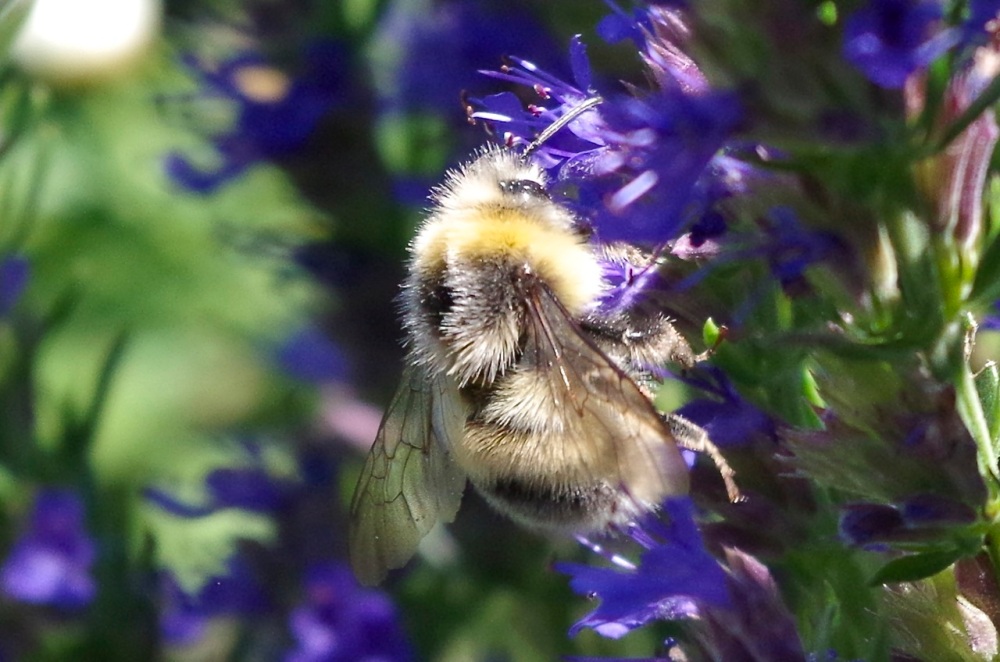 I was given a bee house in May. Previously I was the proud owner of a bumblebee nest box, which didn’t seem to be a success until, in early Spring 2014, I watched a small, dozy bumblebee crawl out of it, slowly get its act together, and fly off…

I wasn’t certain how a bee house would work, so I put it in a quiet south-facing out-of-the-way corner, later adding a pot of lavender under it.

After a couple of weeks of nada and niente, I decided to move the house to a length of wall that stayed longer in the morning sun, and to dispense with the lavender.

This looked more promising, but I was highly doubtful that such a fine multi-apartment abode would find favour with the bees. The holes looked good – a range of large down to very small – but still, it looked a bit… NEW. I thought it would need to be weathered for 6 months to get rid of the smell of ‘shop’.

Gratifyingly soon, however, I was proved wrong. One morning we found (a) a bee inspecting one of the penthouse suites and (b) 2 partial wax caps 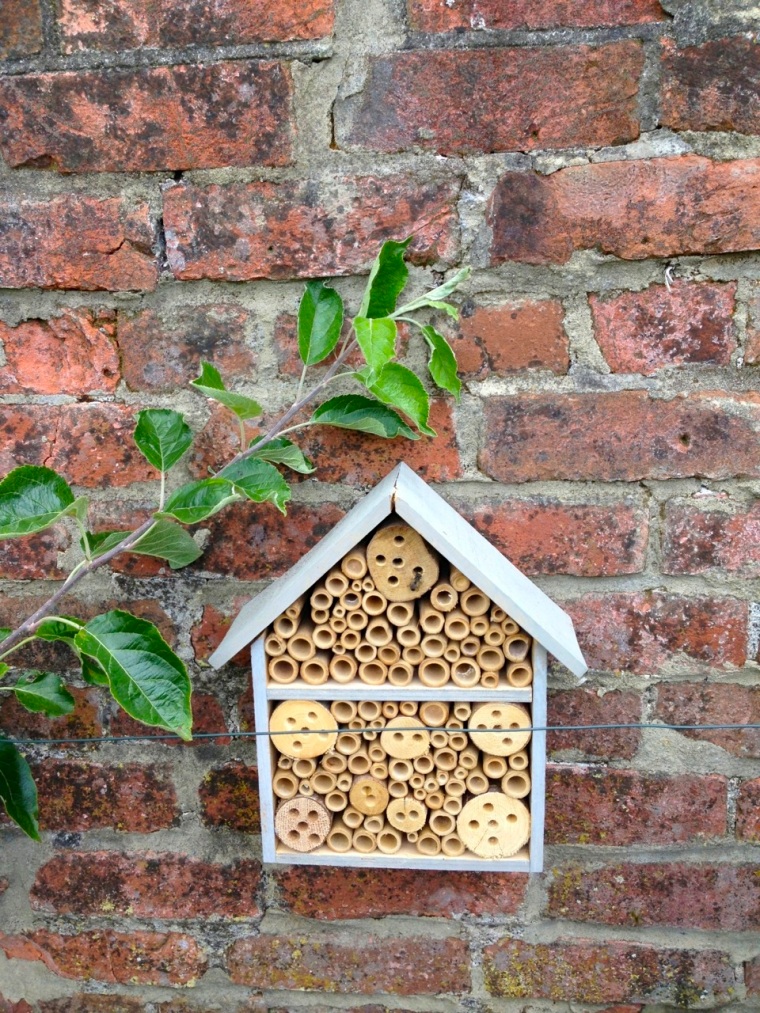 Note bees on the roof and on the lower storey; 2 partially capped cells on the upper storey 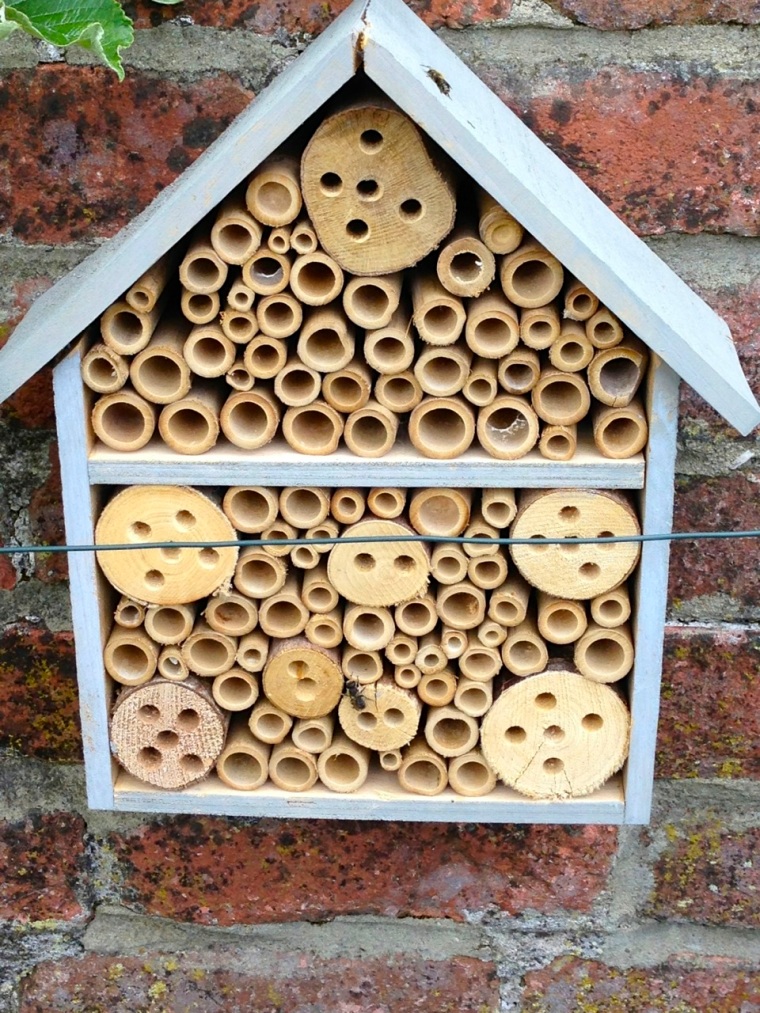 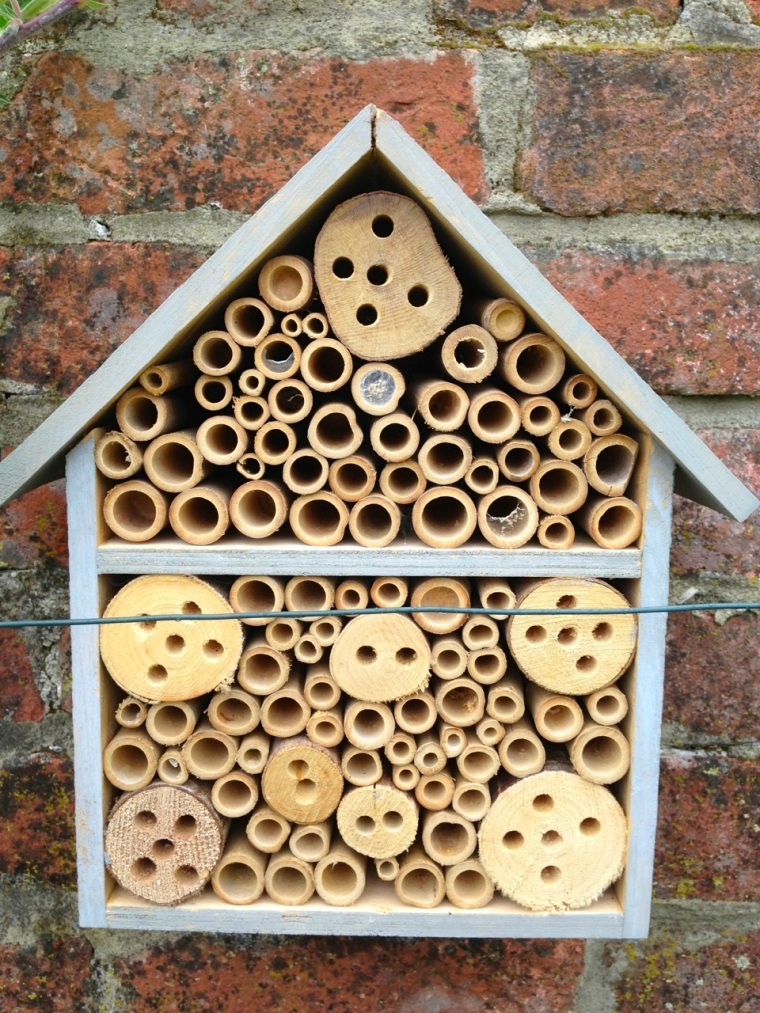 Since then a number of bees have taken overnight accommodation in the bee house. They prefer the holes drilled in wood over bamboo holes for a short stay, and at any given moment there are two or three small faces visible.

So overall we are pleased to report that the experiment can be counted a success. The garden has been revitalised during the last 2 years following 20 years or so of benign neglect, and bee-friendly plants have been a priority. So far, so good.