On a cold, sunny November day, we went to a local church that was slightly outside our usual territory. The purpose was to photograph the medieval mass dial on the porch – or, as it turned out, dials in the plural. Beneath a neat dial from roughly 1600, we found the traces of an apparently older and much more sketchy dial. Below that, the possibility of a  hint of a dial -possibly an original practice run. More of those another time.

As we drove home on a different road, we had a ‘stop the car’ moment. For there, outside a row of old cottages, was a small post or pillar box. Not only that, it was octagonal, Victorian, and worthy of immediate investigation. The location is at Holwell, Dorset – rather more of an area than a defined village. Its Church, St Laurences, is in its own hamlet known as The Borough, down a no-through-road. The box is actually at Barnes Cross near The Borough and Cornford Bridge, National Grid Ref: ST 69308 11775.

The box turned out to be a wonderful find. Plainly, it was an early one. Research when we got home revealed that is is in fact the oldest box still in everyday use in Britain. According to HE, it is dated to 1853 and was made (as the box itself proclaims) by a Gloucester firm, John N. Butt & Co. Roadside boxes were only introduced in 1852, so this one is a very early example. There are apparently two other extant boxes made by them, one at the National Postal Museum in London and the other a private box at a hospital in Plymouth.  Standardisation of design was not brought in until 1859 – before that, designs varied from area to area.

The box is grade II* listed in 1987, designated thus for its ‘legacy record’. Despite the listing, the box became badly dilapidated, until in 2104 a restoration campaign by the local community succeeded. The Daily Mail carried an article with ‘before, during, and after’ images. The box had to be stripped before being fully refurbished to its former glory.

This very early box has a number of interesting original features, most of all the vertical letter opening, the royal insignia, and the fact that the makers advertise their skills twice over. The most important modern feature is of course the collection notice in its inset – proof that it is business as usual 165 years after the box was installed. 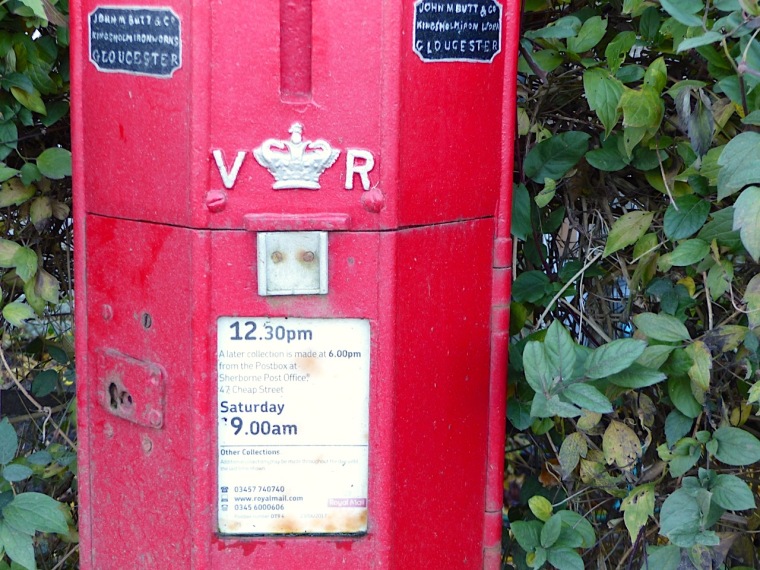 I have referred to this box as a post box, with a nod to pillar box  (which is the name I grew up using). I realise some prefer postbox in one word. And clearly the correct description in the 1850s was letterbox, as shown printed on this example. But I imagine that in those early postal days houses did not have what we now usually call letterboxes, i.e. holes in the front door of a house, so there was no cause for confusion.