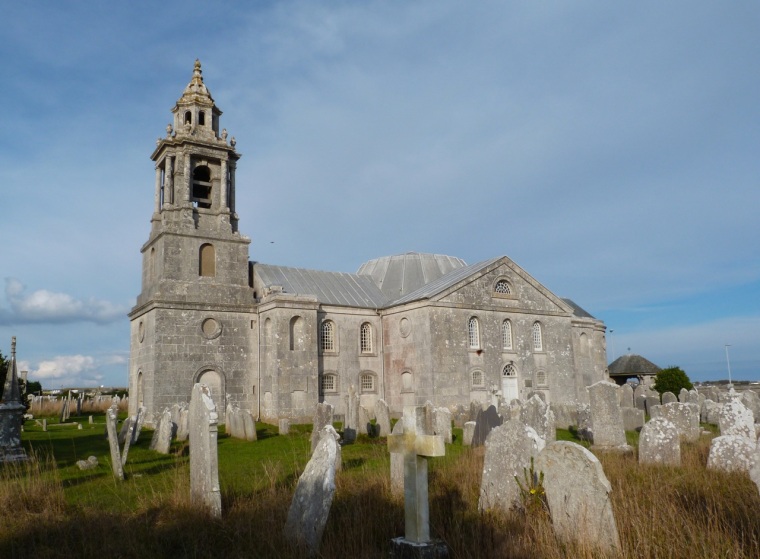 St George, Portland stands high up on Portland, Dorset. Built from the famed local Portland stone in an unusual mish-mash of styles, it is now in the care of the Churches Conservation Trust, which will at least ensure its survival even if services are no longer regularly  held there. Pevsner calls it “the most impressive c17 church in Dorset”. 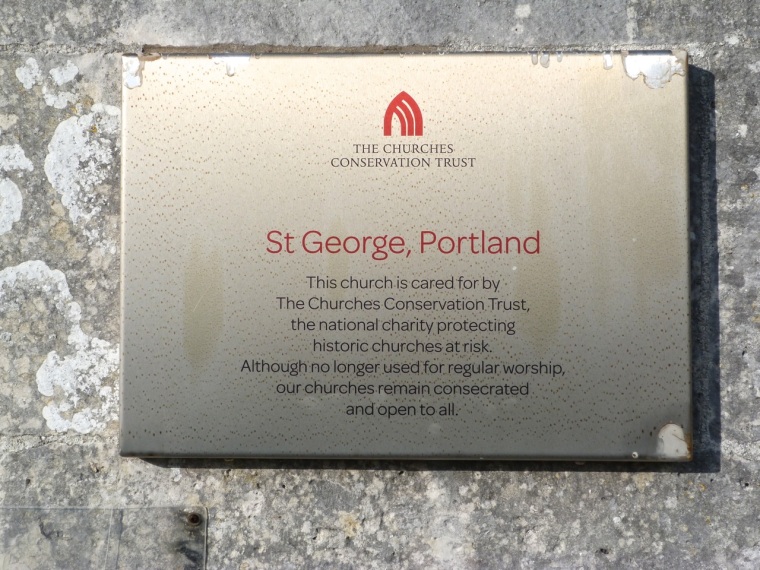 The church and churchyard contain plenty of reminders of Portland’s past both as a significant stone quarrying area, and as a place of major nautical importance. There can’t be many churches with a memorial for those killed by a press gang. 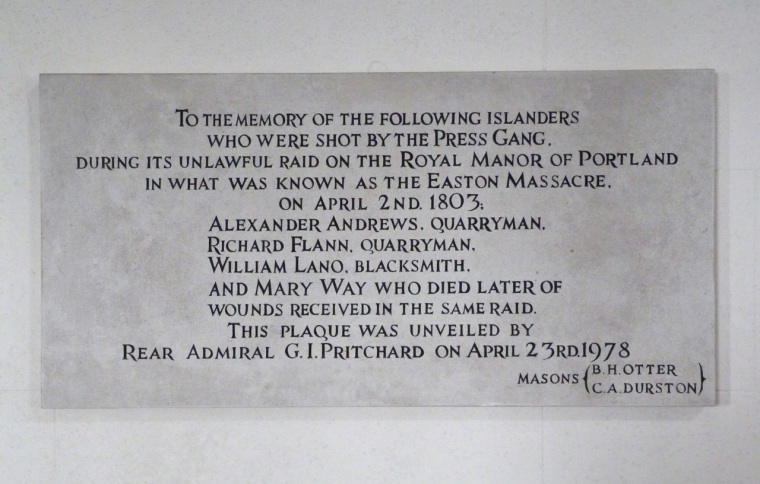 The churchyard is rather wild in places and contains some large commemorative statues. We were intrigued by one quite tidy grave (below) and were left wondering about the design – the little roofed gateway, the raised apart in the top right corner. What does that indicate? 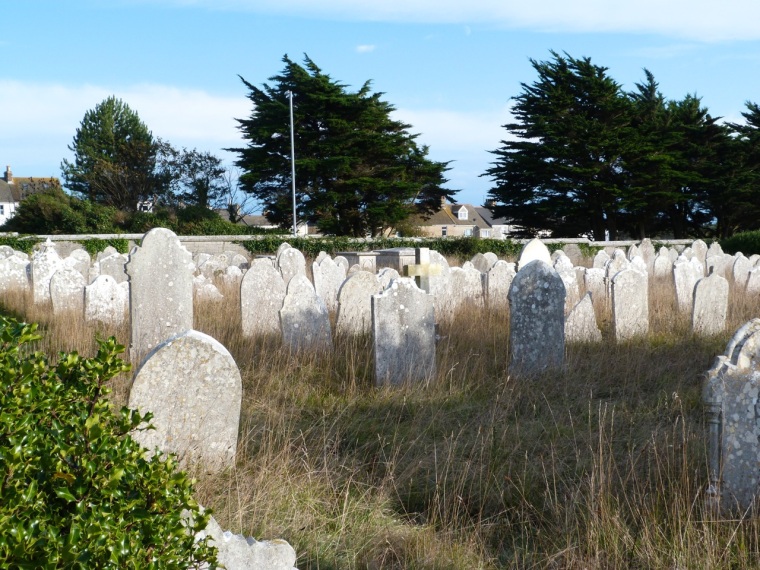 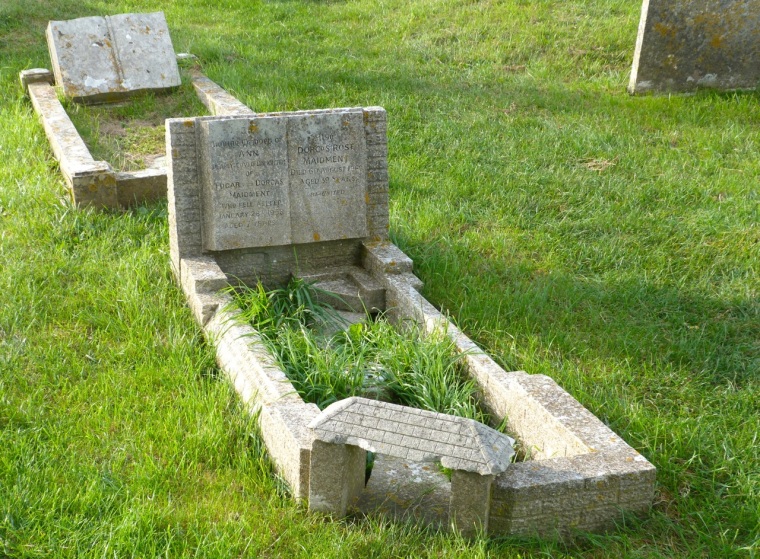 The thick grey walls of St George are typical of the local stone. 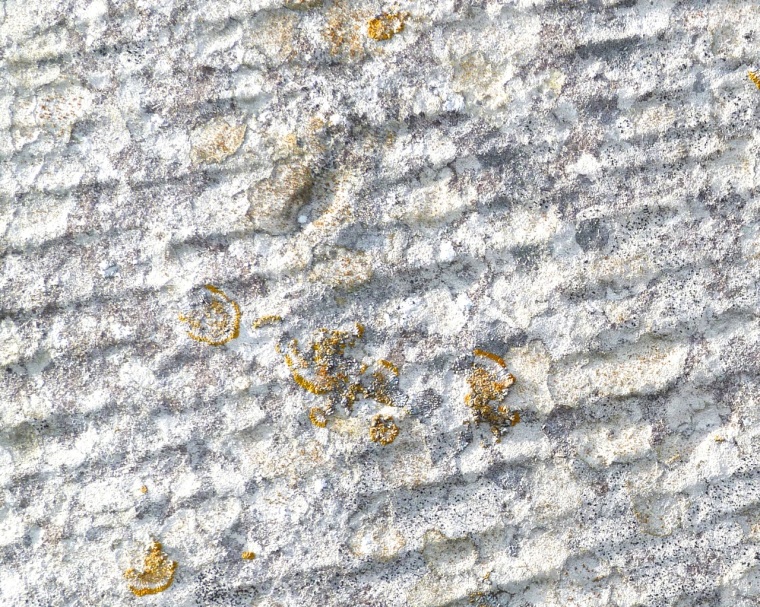 The unkempt churchyard is a good place for wildlife, with plenty of hunting perches for kestrels 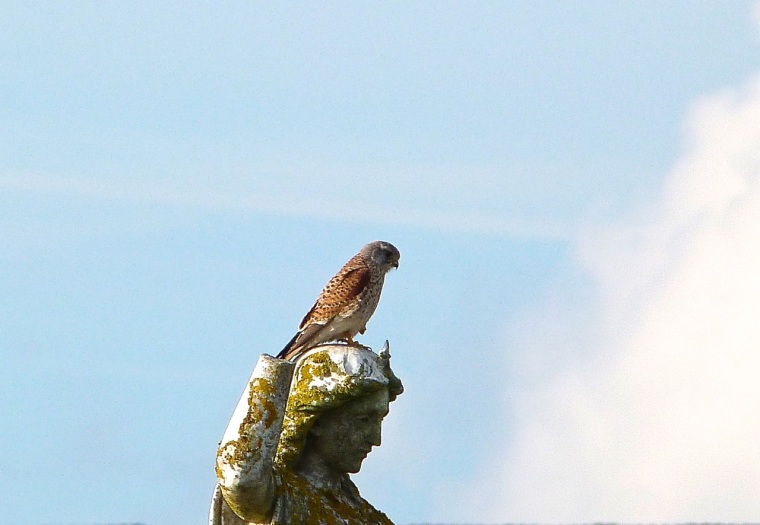 Pulpit Rock is an artificial stack of rocks at the southern tip of Portland. It was created in the 1870s during quarrying as a relic of the industry. It is climbable and is apparently somewhere that the adventurous like to ‘Tombstone’, an activity beyond my imagining. 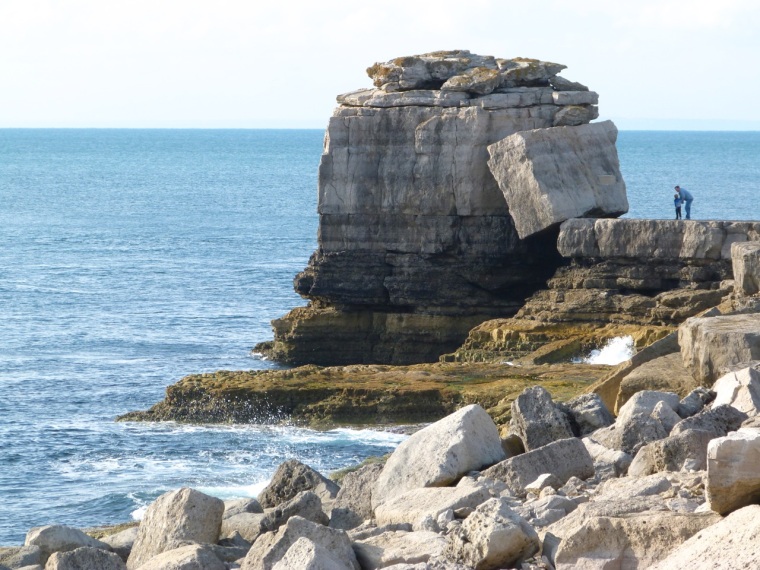 The flaggy flat areas near the rock are reminiscent of the ‘Flaggy Shore’ of the Burren, Co. Clare

Rock. And a pretty wheatear. There were also meadow pipits, and lots of gulls 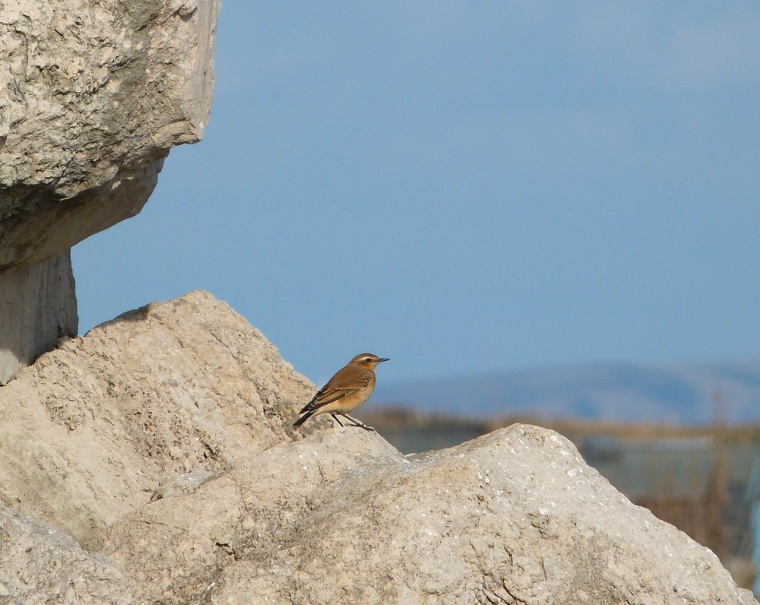 The rock surfaces all round Pulpit Rock is known as ‘Snail Shore’, embedded with millions of snail, oyster and mollusc shells from what was once the seabed in Jurassic times. Here are a few examples, some surpassingly large. 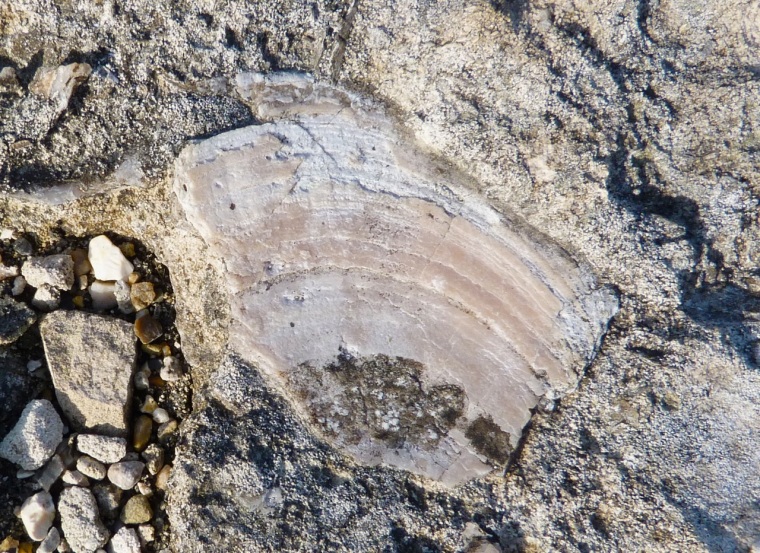 An arty shot of Pulpit Rock to end with, taken into the sun with mixed success

The Chesil Beach, or Chesil Bank, is a dramatic 18-mile curve of steeply banked shingle stretching north-west from Portland (the southern-most point of Dorset) to West Bay via Abbotsbury. The formation contains a long tidal lagoon known as the Fleet.*

Before a causeway road was constructed, the bank connected the mainland to the Isle of Portland, creating a form of TOMBOLO (strictly, it is a ‘barrier beach’). The uninterrupted shingle strip of Chesil beach is up to 50 feet high in places. The stones are large at the Portland end, gradually reducing in size until, by the western end at West Bay, they are pea-sized. It is said that in the past (and maybe still) local people were able to tell the location on the beach that a particular pebble had come from. This knowledge was supposedly helpful for the accurate landing of contraband at dead of night, smuggling being a popular occupation along the Dorset coast (and maybe still).

Chesil Beach, the Fleet and the Isle of Portland, from the north-west over Abbotsbury

Chesil Beach looking north-west from a viewpoint on Portland

A long shot of the same view, showing the Fleet  lagoon 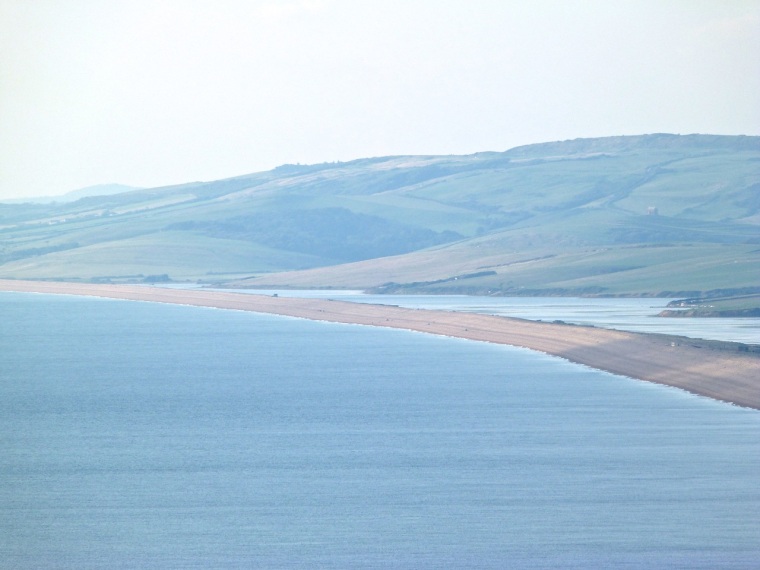 Boats on top of the beach at Portland

Further along, fishermen line up all along the water’s edge 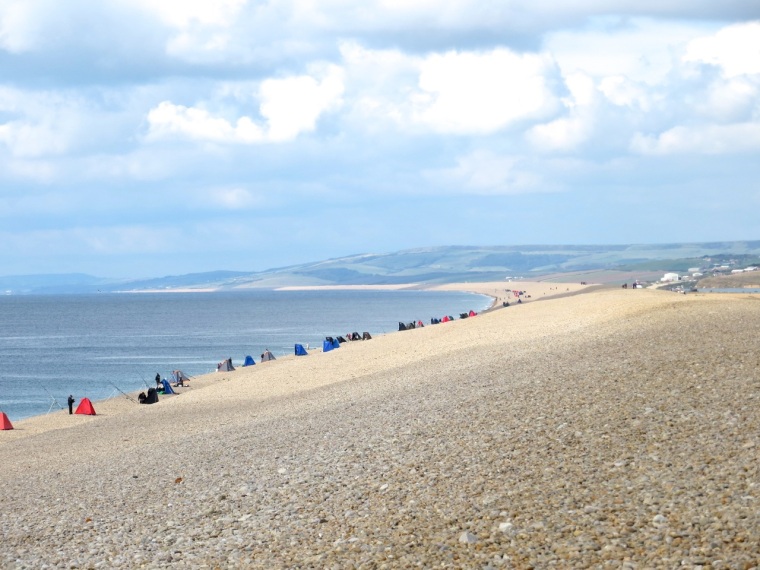 The rake of the beach on the seaward side. It’s much steeper on the landward side.

We sat on a tide-shelf above the waterline – the top stones bone dry, the next layer down wet.

Everyone will be familiar with the gentle swoosh sound of small shingle as the waves come and go. On Chesil Beach, the wave interaction with the large pebbles produces a remarkable clattering and clacking sound that is mesmerising to listen to. Luckily I remembered the video button on my camera, so here’s a very short movie to demonstrate this.

Here is a collection of photos of the stones around us as we sat by the sea. The apparently uniform colouring of the beach from a distance turns out to be a blend of many soft, subtle colours and shades – not least because the stones are of different materials. The geology of the beach would make a good post for another occasion, but not by me!

Close-up of the bottom left corner above 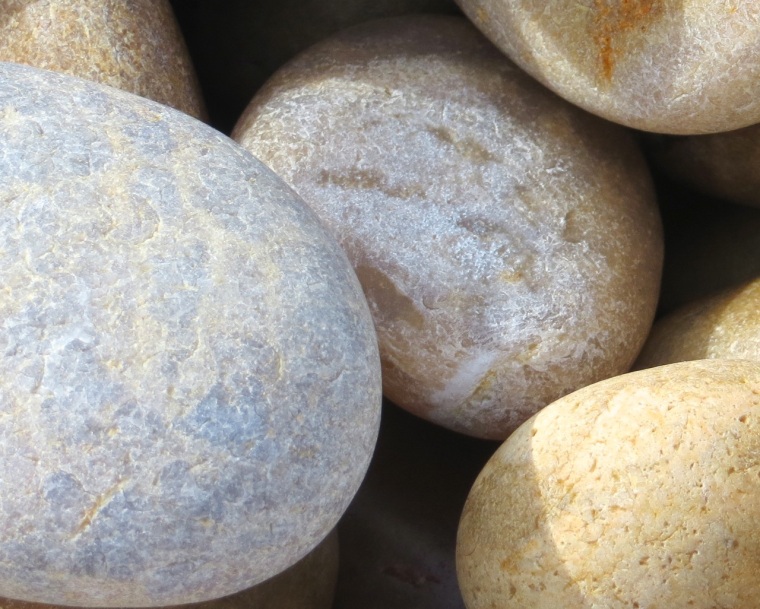 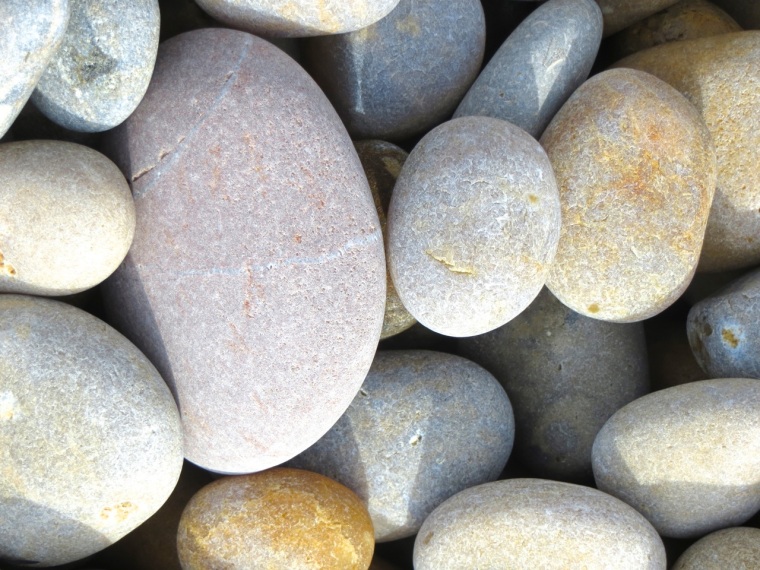 Finally, a reminder of the area’s more turbulent past – a time of press-gangs, blackjacks and daggers swiftly drawn in candlelit taverns. A portland stone plaque in the Church of St George, Portland gives eloquent testimony to an era of lawlessness.

Later, and perhaps in consequence, Portland became the centre of the Knuckleduster-making industry that flourished on the island until the passing of the Prevention of Crime Act 1953, which defined and prohibited “the carrying of offensive weapons without lawful authority or reasonable excuse”. The industry, already in sharp decline in the 1930s, was by then nearly defunct, with only one craftsman still active on Portland. In 2012, a large and elegant sculpture to commemorate this unusual aspect of Portland’s history was installed in a prominent position, commanding a fine view over the the Chesil Beach to Weymouth and the mainland beyond.

* I’m reluctant to endorse the enthusiastic marketing of large swathes of the Dorset seaboard as ‘The Jurassic Coast’. There are fossils in many places. They are fun to look for. More fun to find. Best not to turn it into a Theme Park. I’ll leave it at that.

Portland is a ‘tied  island’ at the southernmost point of Dorset, linked to the mainland by a 5 mile strip of steeply banked stones and pebbles called the Chesil Beach (or to the older among us, Chesil Bank) that runs northwest towards Abbotsbury and West Bay. There is now a road, of course. The bank’s formation is known as a ‘tombolo’, where a spit joins to land at both ends,  creating a tied island and often a lagoon (here known as the Fleet).

I’ll be posting about Chesil Beach and other aspects of Portland in due course. Meanwhile, I’ll focus on the southern tip of Portland, known as Portland Bill. There are 3 lighthouses there. Two were operationally replaced in 1906 by a classic red-and-white striped edifice, and are now, respectively, holiday apartments; and a bird observatory. The ‘new’ lighthouse stands guard over a strong tidal race caused by the underwater continuation of the Portland rock ‘shelf’ and the Shambles sandbank further offshore.

Portland is one of the ‘Sea Areas’ familiar from UK shipping forecasts, located between Wight and Plymouth. The lighthouse, 115 ft high, is a prominent navigational landmark for the English Channel.

Since 1514, Trinity House has been the organisation with responsibility for lighthouses and the safety of UK shipping generally since the grant of a Royal Charter by Henry VIII. The Portland light bears the Trinity House arms.

It also bears a substantial foghorn, essential to warn of the coastal rocks as well as the strong current from the tidal race

At the cliff edge is a stout obelisk of portland stone erected by Trinity House in 1844 (before the present lighthouse existed) as a daylight warning to passing ships of the dangers of the offshore race. 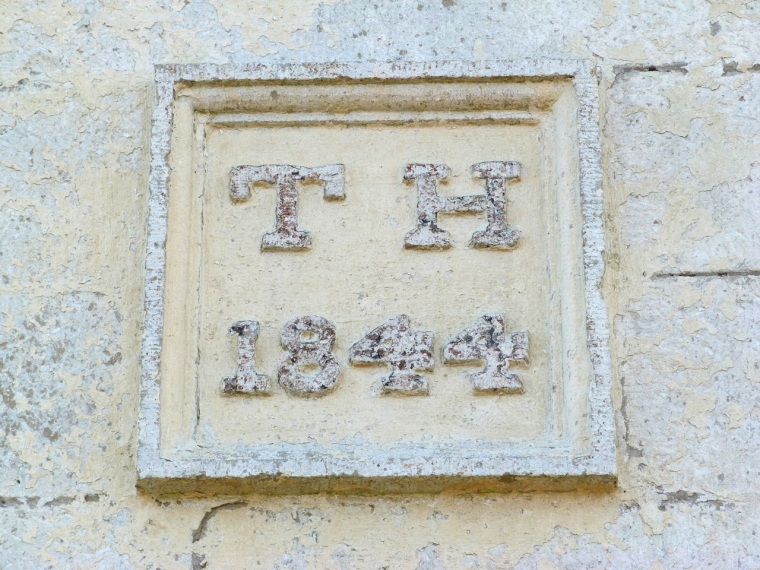