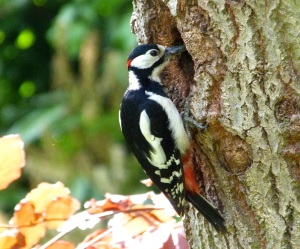 It has now become clear that the insistent purring noise deep within the nest-hole  is not made by the adult woodpeckers singing restful lullabies to the chicks. That was my vivid and homely imagination. It’s the chicks themselves!

By last night the sound had become louder – I could hear it 15 feet away from the tree. And instead of one agglomerated soft churring sound, it had become fragmented, like several very tiny contented cats being stroked simultaneously. There is a great deal of parental activity, and every morning the parents have a good clear-out of the nest. The greenery underneath is covered in debris.

I made another short recording of these new sounds last night, which I uploaded to Xeno-Canto. You can listen to the simple recording or try the Xeno-Canto one below it, which shows the first 10 seconds as a sonogram and gives more information. 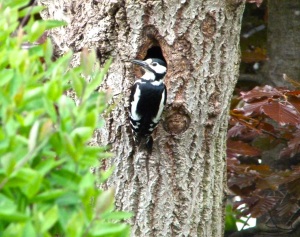 Another 24 hours later, the chicks are turning up the volume, and can now be heard from even further away. Here is another recording made from exactly the same distance – about 6 inches – from the nest-hole as before. Again I’ve put in a simple audio version, with a Xeno-Canto upload and sonogram below for those who might be interested. The sonogram shows the same pulsing effect, but the increased noise registered can quite easily be seen. Tomorrow I abandon the chicks for a few days, and I will report back next week. When the little birds start peeping out of the hole at the world outside, I hope to get some photos.

For a simple guide to recording birds on your iPhone or whatever, and converting the result to an mp3 file, see previous post or click for direct link HERE