Gonville and Caius College is one of the oldest colleges of Cambridge University. It was founded in 1348 by Edmund Gonville, who has suffered the cruel fate of rarely being mentioned nowadays; the college is almost invariably referred to simply as ‘Caius’, after John Caius, the man who re-founded the college in 1557 at a time when it had fallen on hard times.

The lower part of the Gate of Honour

The middle section of the Gate of Honour 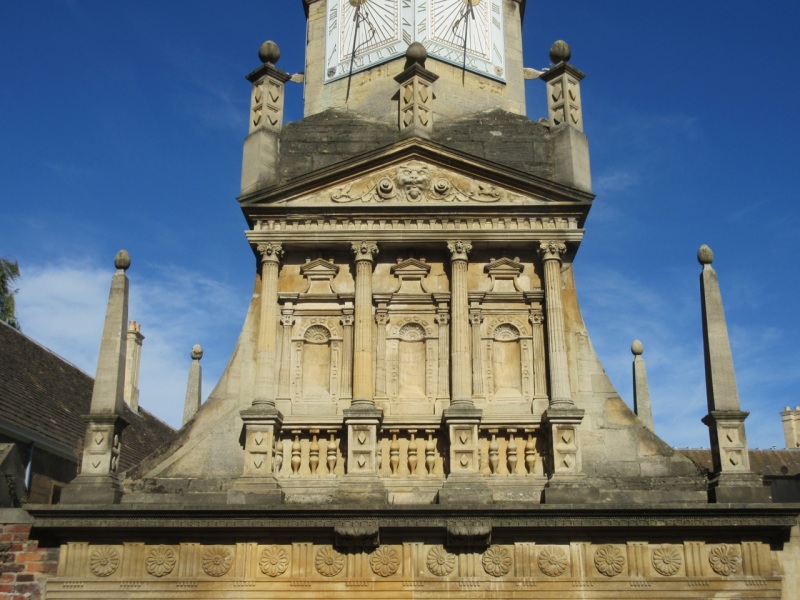 The handsome modern sundial was installed in 1963 as part of the 400th anniversary celebration of the college’s re-foundation by Caius. There are in fact 6 vertical sundials, arranged in 3 pairs placed round the hexagonal tower. They were designed by an astronomer and fellow Dr Message, and the Junior Bursar Dr Powell. The bronze dial faces are painted with vitreous enamel. Of the original set of sundials dating from 1557, only traces remained.

There is something very satisfying about this set of dials. The symmetry, the proportions, the materials and the design all seem to work in harmony. Cambridge colleges have many sundials between them, many original and ancient. Of the modern dials, the Caius Gate of Honour is adorned by, arguably, the finest.**

** The principal sundial of my own college is dignified but… somewhat undistinguished in comparison!

For further reading, track down a copy of “Cambridge Sundials” by Alexis Brookes and Margaret Stanier (available from the British Sundial Society). It can also be found as a downloadable pdf. There is an equivalent book by Margaret Stanier covering Oxford

One thought on “CAIUS COLLEGE, CAMBRIDGE: 6 SUNDIALS ON THE GATE OF HONOUR”