Here’s a moth species new to me, that I couldn’t locate on any UK Moth ID site. Then I found out why. The Box Tree Moth Cydalima perspectalis is native to East Asia. It’s an introduced species to Europe, first recorded as recently as 2006 in Germany; 2008 in UK; and nearly everywhere else since. It thrives on Box Buxus colchica, and to an extent the species may have spread with exports of the bush. And it’s plainly a busy reproducer… and now it’s here, it’s probably a stayer.

A few days ago we had one in the kitchen (bonus points for recognising the cookery book it chose to land on). I took some quick photos for ID, failed to find a match online, and resorted to the excellent Moths UK FB page, where mothmaticians quickly respond to images uploaded for ID. I later found out that one of our sons has had two infestations this summer, resulting in total loss of two small rows of box.

The moth lays its eggs on the undersides of Box leaves. The caterpillars feed so rapaciously on the leaves and shoots that they may simply destroy the entire plant. And there are two or three generations gorging each season. Furthermore, there are no natural predators (such as the Asian wasps that target the larvae in their native lands). Maybe in time that will change, with birds and other predator species learning a taste for the things. 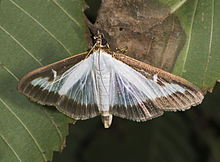 There’s also a quite different brown morph / colour variant of the Box Tree Moth to contend with, which I imagine is just as effective in destroying the host plant. 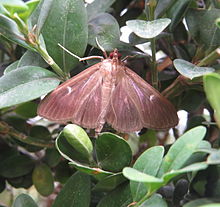 There are apparently various methods of dealing with the problem, mainly involving chemicals, bacteria, nematodes, and pheremone traps. All seem to require intensive repeat applications. Some of these solutions may presumably have an adverse effect on other wildlife.

As far as ‘mistake’ species are concerned, the ones that have accidentally (or through escape or deliberate release) colonised places far from where they belong, I reckon a case-by-case approach is needed. Harmless to humans, other life-forms, ecology and the environment? Bring them on. Harmful in any of those respects, parasitic, fast-spreading, predator-proof, potentially ineradicable? Expunge them ruthlessly.
I take one of these views about the Box Tree Moth. Look out for the eggs, the caterpillars, the imagos. Report them. Or DIY. A box bush might be a good place to start.
Top 3 photos from the kitchen; the others thanks to Wiki. There’s a mass of stuff on these critters and their little ways online if you want to find out more. Not trying to be controversial here, btw, but I’d be surprised if you can’t name half a dozen species of animal, bird and plant that are invasive to the UK / Europe, damaging to the new host territory – and would be best eradicated.